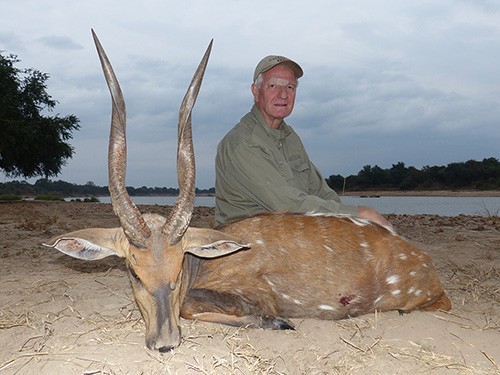 Zambia was one of the last countries to be discovered by foreign sportsmen, but for more than 30 years now, it has been one of the most popular safari destinations in Africa.   Zambia is a  large country, a bit larger than the state of Texas, and was previously known as Northern Rhodesia.  Its diverse terrain, including lush river valleys, Kalahari bushveld, plateau  woodland and  huge swamps, contains a great variety of species.  Zambia is one of the best places in Africa to hunt dangerous game such as lion, leopard, buffalo and elephant, as well as a great variety of plains game.  The finest sable in Africa are found in Zambia, as well as several unique species found nowhere else.  These include the Kafue lechwe, black lechwe, and Cookson’s wildebeest.

In recent years the Zambia Wildlife Authority (ZAWA) has done much to improve wildlife management, which is the cornerstone of the country’s tourism industry.  Zambia boasts 19 national parks and 27 game management areas (GMAs).  Modest harvest quotas and tight control of the safari industry have resulted in a high level of service and high success rates on big game safaris.   Three types of safari licenses are permitted in Zambia :  the Classic Safari, with a minimum duration of 14 days, which allows the hunter to hunt leopard lion, buffalo, and other premier species, as well as all species of plains game, and the Mini Safari, which allows the purchaser to hunt for a maximum of 5 animals, excluding high value species such as lion, leopard, sable and roan are the most popular.  There are also Special Safari licenses which authorize the purchaser to hunt specific species such as Kafue lechwe and sitatunga.

Approximately half of Zambia is still sparsely populated.  Therefore, there is ample excellent habitat for wild game.  The Luangwa Valley has long been one of the most famous areas in Africa for lion and leopard and huge buffalo.  This long river valley with its attendant flood plains and surrounding Mopane woodland has two national parks, which provide a steady reservoir of game for the several GMA blocks which surround them.  Equally famous for full-maned lions is the Kafue National park and the hunting GMAs which surround it.  On the Kafue Flats the largest of all subspecies of lechwe is found- the Kafue lechwe.  The Kafue is also famous for huge sable and a great variety of other antelope.  In the north of the country the vast Bangweulu swamp is home to black lechwe, tsessebe, oribi and Zambezi sitatunga.

We represent several of the best  safari operators in Zambia covering the full spectrum of habitats and species.  Deluxe camps made from stone and other natural materials, or with East African style tents are the rule in Zambia.  Expert staff providing first class service and excellent meals in remote surroundings characterize safaris in this country.   Some hunting concessions can be reached by vehicle from Lusaka, but others, such as the Luangwa Valley and the Bangweulu Swamp require the use of charter aircraft.

The general hunting season is from mid May until the end of November, but the prime time is June through mid October.